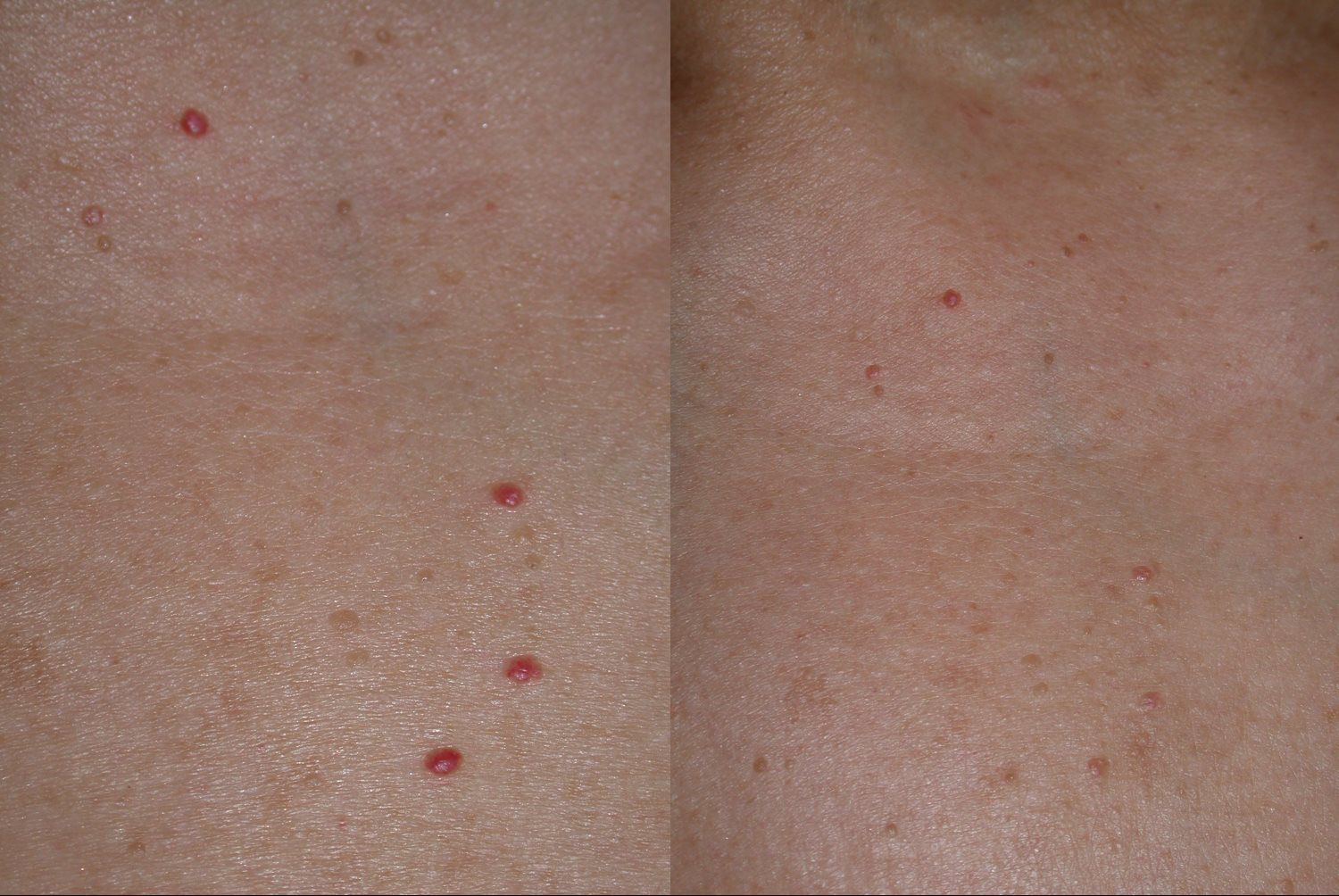 Angiomas are benign growths that consist of small blood vessels. Angiomas can be located anywhere on the body, but the most common area is the face and torso. There are several different treatments that we will discuss along with the most effective and safest way to remove them.

The most common type of angioma is the Cherry Angioma. It looks like a red freckle and the spot is made up of tiny dilated vessels on the skin surface. These vessels account for the cherry red color. When it first occurs it is about the size of a pinhead, but they can become as large as a ¼ inch in diameter and sometimes even larger. These angiomas are normally due to genetic factors and aging. They are normally seen after the age of 40.

Spider angioma (can also be called nevus araneus, spider nevus, or vascular spiders) is a bright red spot with tiny slender broken vessels coming out from it (they resembles spider legs). Spider Angiomas are usually less than a ¼ inch long. These angiomas normally developed in childhood or during times of hormonal changes but they can occur at anytime and on anyone.
Angiokeratoma is an overgrowth of vessels and skin cells. It is a dark red to purple red spot that is raised above the skin. It may also have a scaly rough surface. These angiomas sometimes mimic skin cancers and a biopsy may be recommended before any removal attempts.

The three most common ways to treat angiomas are: electrodessication, liquid nitrogen, and laser. If the angioma appears to be pre-cancerous, excision (surgically cut out) may be recommended.
One way to remove unwanted angiomas is by electrodessication, which is an electrical needle that is touched to the skin and sends a current of energy, which destroys the vessel.
Liquid nitrogen is a cold gas that is sprayed on the skin with a spray gun or applied with a cotton swab; it also will destroy the vessel.

Yag and Pulse Dye Lasers use a beam of concentrated light that will destroy the vessel and in my opinion, offers the most effective and innovated way to remove angiomas.
All of these angiomas are painless and harmless but they are not very attractive and can easily be removed. The treatment is usually effective in one visit and the recovery time is minimal.